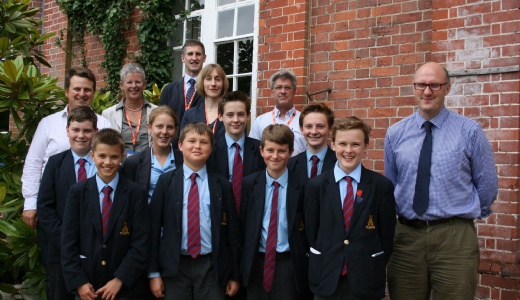 In pure ‘Dragon’s Den’ style, MHS Pupils in Year 7 have presented a series of concepts and ideas to a panel of industry experts for the first ever annual ‘Daley-Bryan Prize for Creativity and Innovation’.

The purpose of the prize is to highlight the importance of creativity and innovation for future economic prosperity, technological advancement and in solving global problems using science, technology, engineering and maths.  MHS Science teacher and Year 5 Tutor, Mr Payne-Cook co-ordinated the prize and selected a judging panel who will shape the direction of this ground-breaking new initiative over the coming years.  He said “Creativity is an unquantifiable and immeasurable way of thinking as it cannot easily be tested and measured.  Creativity can be described as the ability to come up with new ideas, or new approaches to old problems and for it to have a purpose it must address a real life problem or unmet need”.

The judging panel consisted of five experts:  Dr Gary McKay - A world leading remote sensing scientist who has pioneered satellite mapping techniques and worked for NASA.  Dr Eddie French – a biochemist and drug product development scientist who has led large research groups in industry and academia and is also an independent researcher for Medicins sans Frontier, Imperial College, University of Bath and the University of Nottingham,  Andy Puncher, founder of pH+ Architects which employs over 40 architects in London, Sydney and Barcelona,  Kate Schuricht - an artistic designer, specialising in ceramics and former Marlborough House Teacher, the fabulous Mrs Daley!

The children’s projects were judged on three key criteria:

The judges said that the winning candidates were those with designs and concepts that were well-researched and those able to explain the CONTEXT of their idea, their CREATIVE thinking as well as an ability to COMMUNICATE their idea confidently and passionately to the PANEL.

From lifesaving wristbands to reducing your energy bills through exercise,  from mess-free paint kits to mind-driven vehicle systems – there really was something for everyone.  All the children were congratulated for their efforts and potential in their ability to devise an idea or invention, with the judges adding that they were a credit to themselves, their parents, and all who had taught and inspired them in their short lives thus far.  The judges were unanimous in their delight at having been involved in such a “special school initiative” and we will be watching closely to see where the competition, and all the children’s brilliant ideas go next!