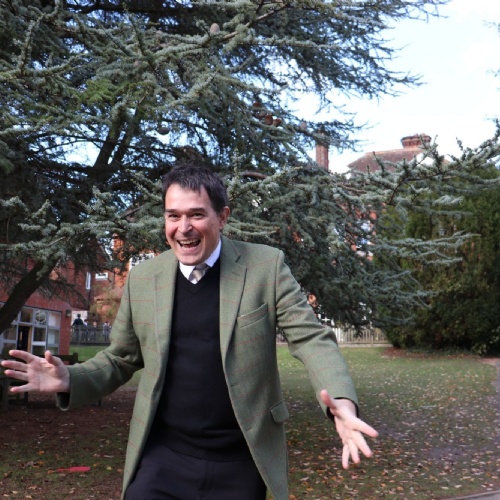 Head of Maths Mr Walker not only takes Magic Club, but was an extra in a Harry Potter film...read on for his full Snapshot Interview!

What inspired you to be a teacher?

I was not sure what I wanted to do at school but I do remember a day when I was being told off in the Deputy Heads Office at the age of 15 - in the 'I like you as a person but not your behaviour' bit of the telling off, she asked me what I thought I was going to do as a career.  When I mentioned 'teacher' she said, 'You should do that, you'd be good at it' and here I am!

Tell us about your path into teaching..

I wanted to do something else before teaching so I did a sandwich course at university. I had three six-month placements working for an oil company, doing government statistics and working at a bank.  It was then I did my PCGE at Leeds, in Mathematics with Outdoor Education, which was enormous fun; teaching maths in the week and playing in the Dales at the weekend.

What do you love most about teaching?

I like the honesty of the feedback.  I remember doing some fabulous statistics when on my bank placement and my gorgeous maths was sent up the chain.... Whereas when teaching, the children are always honest when things go well - and when things don't go quite as well.

I was quite small (July birthday) and very untidy.

When you were younger, what did you want to be when you grew up?

What’s the funniest moment you’ve had in a classroom?

So many - I think the one that comes to mind is when my Form won the 'tidiest classroom' award when I was teaching in Norfolk.  My class were well known for not being terribly organised and we came last the term prior....but a a bit of incentive.... we spent the next term in a classroom with '6W - voted the tidiest form in the school' and other such posters.... we milked it...and then came last again!

What’s the most important lesson you can teach?

I think that the motto of my last school is everything - it is Aim High, Be Kind and Dare to be Different. (I especially like the last one!)

What has been the proudest moment of your career so far?

Bar none - my proudest moment comes from when I was teaching at a boarding school near Newbury.  In the morning, I would have a little running club for any boarders that wanted to go for a run before breakfast.  One evening the boarders were so poorly behaved that the 'morning run' was removed as a punishment.  I think it is the first time ever that children have been banned from early morning runs as usually it is the other way round!

What are you most excited about at Marlborough House this term?

There is such optimism surrounding the school at the moment and I am really excited to see what we are going to do next.

What makes Marlborough House such a special place to be?

Schools are always about the people and that is what makes the place special.

Highlight of my day: Tea

The book I am reading: The Unexpected Gift of Joseph Bridgeman, Nick Jones

Most memorable moment at MHS: The joy of being back with my form for a week in the Summer term following lockdown (with the eater fight being the highlight!)