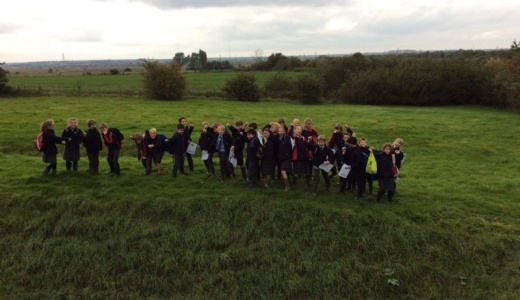 Our Trip to Richborough by Ben H

Richborough is a fort that the Romans built when they first came over to England. The fort at Richborough might be thought of as a hotel because it had so many different rooms and a few different small buildings in the centre where the high ranked soldiers, such as the general, would stay in.

The first thing we saw was the high walls standing right in front of us. As we got a bit closer we could see two ditches dug around the front side of the remains of the fort which were originally used for fortification. Next we walked around the edge of the ruins to the far right of the fort. There we saw holes in the ground where the under-floor heating would have been and stone footings that Louis Foy, William Quinlan and I thought were the footings of bathrooms.

After that we walked a bit further to the back wall of the fort. There Mrs Budd told us that the walls were built from materials from the beaches and asked us to find evidence to support that statement. I found two pieces of evidence; the first piece of evidence was that some of the layers of the walls were what seemed to be concrete. I thought that the concrete would be made using sand from the beach. The second piece of evidence was that in the concrete there were shells.

Behind the far wall of the fort there where two other ditches one of which was the deepest. Behind the far side wall there is an entrance to the fort which is at a 90 degree angle. We were asked why the entrance was at 90 degrees, the answer to this was because if Celts tried to break into the fort they would have to run in at one direction and then change the direction in which they were running to be able to get in. By making this entrance at 90 degrees it would slow down the Celts and make the Celts more vulnerable to being defeated.

Afterwards we entered the fort again and walked over to the left of the ruins where there was the old entrance/exit. Once we had seen the entrance/exit and the guard posts we walked back to the visitor centre where there is a museum and group by group looked around the museum. The museum itself had four cabinets in it. One of which contained a couple of clay bowls with foods that the Romans would have eaten. The foods were asparagus, figs, chestnuts, apples and a meat pie.  Two of the three remaining cabinets contained small objects such as nails and rings. The last cabinet contained a model of the ‘Arch of Titus’ which is an arch in Rome.

After the coach journey we got back at 2.30 p.m. We all found the trip to Richborough Roman fort very interesting and I would like to go back.