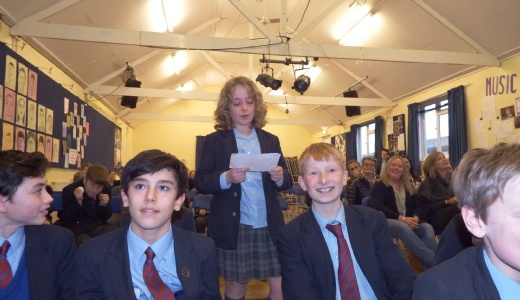 Our Year 7 pupils took to the floor for two thought provoking debates .......

Last Friday’s Year 7 Debates aroused some strong emotions!   We heard some very powerful arguments from all our debaters on two controversial topics:

Whether “Cosmetic Surgery should Be Banned” and whether “Euthanasia should be Legalised.”   These topics both had a “scientific” basis because of the class work they have been doing on the story of 'Frankenstein', which naturally raises all sorts of ethical issues to do with man’s scientific inventions and interventions.

Form 7RA opened the evening and the proceedings were overseen by our lead moderator, Mia, who was very confident, clearly spoken and kept the session running smoothly.  Our other moderators, Nicholas, Ines, Jemma and William, then spoke about each of the debaters, giving the audience a little interesting and sometimes light-hearted background information on each of the speakers. Then the debaters took the floor.

It is always difficult to be the first to speak, but Henry courageously took on the challenge and began by proposing that cosmetic surgery should be banned.  He spoke well, giving some very strong views supported by many interesting statistics on the negative aspects of Cosmetic Surgery when resorted to the search for physical perfection. He was strongly rebutted by James who persuasively, dramatically and convincingly opposed the motion, citing the advantages for many people who have benefitted from having such surgery and arguing for the right to make one’s own decisions.   William then powerfully rebutted many of these claims, exposing some horrifying facts about the more dangerous effects and the high costs of surgery.  William was also confident and passionate in responding to questions from other debaters.   Finally, Ben rounded the first debate off in a commanding and convincing manner, speaking strongly and clearly in rebutting many of his opponent’s claims and asking challenging questions, thereby reinforcing the benefits he espoused.  Ben had some fascinating facts about the Guinea Pig Club, a group of pilots from World War II who benefitted from the pioneering surgery available under Archibald McIndoe at East Grinstead’s Queen Victoria Hospital.  All the debaters and their class members worked very hard to compile strong and persuasive arguments and they all spoke very clearly and expressively. In the end, James and Ben swayed the audience and gained the greater swing of votes and so they won the first debate.

Form 7F then took over, providing us with a most impressive debate on the highly controversial and emotive issue of Euthanasia.  Lead moderator, Olivia, ensured that proceedings ran like clockwork. The moderators in 7F were Georgie, Isabel, Thomas and Maddie all of whom gave very good introductions for their debaters.  Emily had the unenviable task of going first but she did not seem fazed and was very impressive with her clear, well-modulated and expressive delivery, urging the audience to oppose legalisation of euthanasia and warning us of the slippery slope into which it can lead society.  Emily was then strongly opposed by Henry who clearly articulated his dramatic points on the right to die with dignity when faced with an agonising terminal illness.   William  spoke next in a most commanding, confident and compelling fashion giving an impressive delivery and a dramatic portrayal of greedy, grasping family members making life or death decisions for their loved ones and chilling us with his terrifying image of a return to the policies of the Third Reich!   William was a tough act to follow but Max , cool under pressure, rebutted many of William’s points and reiterated the importance of supporting the freedom of choice, citing our compassionate and caring treatment of our pets.   He too was a clear and confident speaker who made good eye contact with his audience.   In the end though, the spectre of those grasping family members and a possible return to the dark days of Hitler and his policies, swayed our audience and William and Emily swept the opposition aside, gaining a tremendous swing of votes against legalising Euthanasia.

The children had all worked extremely hard and were  fantastic in supporting each other.