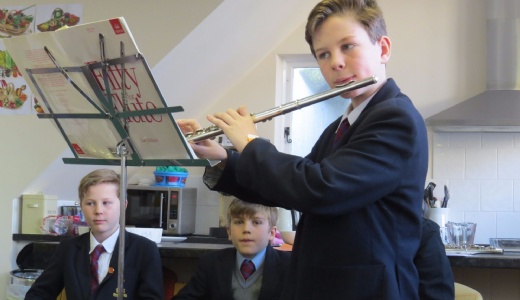 Last Friday a small group of MHS musicians took part in a mini concert at the 'WRAP' Centre in Hawkhurst.

This was a joint venture between Mrs Withey-Harrison and Mrs Foy, one of our parents, who works as a musician there.  They were kindly assisted by Mrs Butler-Graham and Mrs Howells.  The WRAP concert was a very worthwhile event and hugely benefited the children who had an opportunity to play their instruments in an informal setting.  Most importantly the children were able to make a difference and help people who suffer from dementia by sharing music with them. The joy on everyone’s faces, old and young, was a delight to see.

Our Pre-Prep Mini Choir consisting of Barnaby, Rose, Emilia, Annabel, Marcus, Alexandra, Nel, Matilda and Willoughby began the concert by singing some festive songs.  These were followed by Nel and Annabel playing their piano pieces with great enthusiasm. Marcus and Barnaby beautifully sang ‘The Little Drummer Boy’ which clearly brought back happy memories for some of the audience.

Next was the turn of the Prep School pupils. Holly played a lovely rendition of ‘Little Donkey’ on her violin. Claudia, Alice, and Sophia all played their piano pieces with elegance and grace. These were followed by Hal who played his own gorgeous piano and flute composition. Mrs Foy’s beautiful, sensitive flute playing added the icing on the cake to Hal’s moving tune. It was the perfect piece for WRAP.  The Foy family are an extremely talented musical bunch.

We were then lucky to be treated to Louis playing beautifully on his flute and Milos  on his violin. His rhythmical and jolly playing prompted everyone to enthusiastically clap along. The last of the Prep School musicians was Maddy who angelically sang ‘Tiger in the Night'. The concert was then rounded off with the children and adults singing carols together.

It was a very moving experience, made all the more magical as it snowed just as the children returned to school!