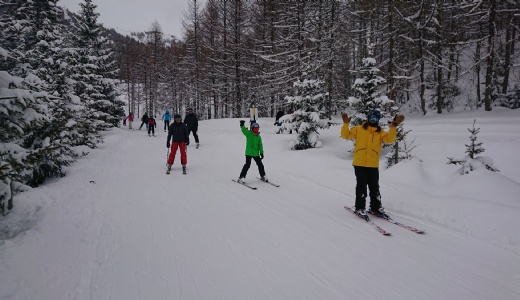 Our  pupils had a wonderful time on the MHS ski trip in early January!

As seen through the eyes of a Year 8 pupil -

On the first day we all had a comfortable flight to Geneva, Switzerland.  Then, with gaining excitement, we boarded our coach and left for Crans, with our altitude gaining we got our first images of snow and we arrived ecstatic with curiosity at the huge chalet that lay ahead of us.

There was even snow in the air as we tugged our suit cases to the welcoming warmth of the building complex. Once we went inside,  we settled in to our first evening, after a hearty and filling meal we were allocated our dorms and ski groups.

In the mornings we were repeatedly treated to a great continental breakfast that satisfied everyone’s hunger.  Also after skiing for three hours we would arrive with our engaging ski instructors back at the hotel after skiing to the door. Each lunch and dinner were wonderful and the food was of a high level.

We had around six hours of skiing lessons each day and they were fantastically fun!  After the three hours of skiing in the afternoon we would settle down and have a snack before doing an afternoon activity like tubing or sledging. These were great fun and just walking through the snow covered town outside the chalet was a magical experience.

After doing one of these amazing activities we would travel back to dinner and then after relaxing we would go to another activity, like bowling for example, or a torchlit walk.  Afterwards, if the time was still early enough we would watch a film and then head up to bed.

Unfortunately, a mid-week a storm hit  and consequently that meant for two days we could not ski, however this turned out to be very entertaining!  We went rock climbing at a massive indoor centre, we did a very amusing fashion show (with clothes made only out of bin bags!) and we took part in a 4m egg drop where we had to to try and save our group's eggs when they were thrown off the balcony.  Some groups decided to build crude parachutes out of bin bags while others tried to cocoon their egg in paper or tissues.  Great fun!  Also, we baked cookies and one group made theirs in the shape of a lightning bolt but it ended broken - apparently it was the tastiest though!

On the last day we had a small prize giving that was greatly rewarding, moreover we also had a fantastic disco on the penultimate day that was very enjoyable.

After an amazing week's skiing we had another quick and simple journey back to England - it was an astonishing holiday. All the children would like to thank their parents for sending them on this once in a life time trip and especially the teachers for giving up their time to take them.