Gallactic Challenge - MHS part of the winning team once again! 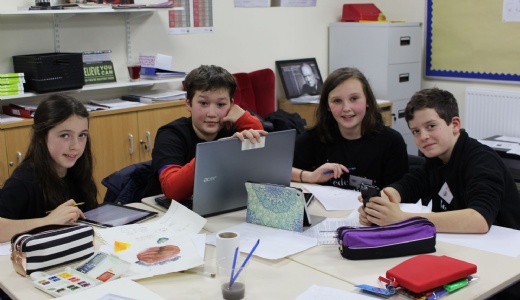 Twelve children (seven from Year 7 and five from Year 8) attended the third annual Bede’s Galactic challenge on Saturday – and MHS were part of the winning team for the third year running!

Eightly one children participated in total, split into four large teams.  Marlborough House pupils were split across two of these teams: ;Astrodyne Delta' and 'Infinity aerospace'.  Within each large team the children were split into four sub teams:  Structural, Human, Automation and Operations.  The overall task was to design a subterranean base in a lava tube on Mars, suitable for 400 permanent inhabitants.  In Astrodyne Delta, Meg led the Human team, presenting confidently in the final pitch alongside Thomas.  Will, Ethan and Felicity (who was praised by the judging panel) offered back room support.  The structural team in Infinity aerospace was led by Kamran, supported by Alexander and James.  The human team was led by Tallulah, supported by Emily, Nick and William.  This whole team gelled particularly well and presented the slickest pitch to the judging panel, winning the competition overall.  So, Marlborough House were part of the winning team for the third year running!

This is an incredible event.  The children are thrown together with complete strangers at 9am, set an incredibly complex and multi-faceted brief; and then have to organise a 10 minute presentation to the judging panel by 3.15pm in the afternoon.  Normally such a process would take months.  Miss Davis and Mr Payne-Cook were in awe of the children’s technical knowledge, creative thinking, collaboration skills and most of all their very clear and confident presentations.  It was fantastic watching children bouncing ideas off each other in a free and open task (with some defined parameters): dynamic, enthusiastic, focussed, determined, conscientious and confident.  We have some inspirational young people at MHS, and activities like this inspire them to dream to be all they can be.