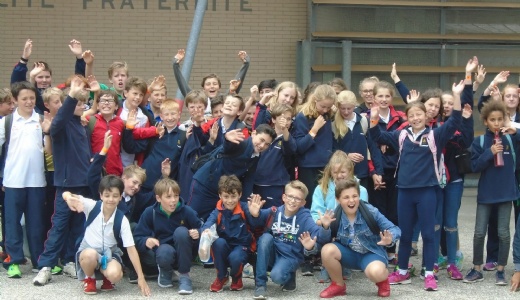 Our Year 7 pupils had a wonderful trip to France last week!

With great excitement they all set off early last Thursday morning to catch the Euroshuttle to France.   When they arrived they had lunch with their French penfriends at their College in Le Touquet,  followed by a spot of shopping and a tasty crepe.   They then travelled to Dieppe, where they stayed for the following two nights, and enjoyed a game of mini-golf.   On Friday morning it was Mr Ridge's turn for  excitement as he showed the children the spectacular Bayeux Tapestry, which has been part of their History curriculum this year.  Then it was off to a Goat  Farm, for a tour of the animals and the cheese making process, the tour was in French and they learned a lot of interesting facts about goats as well as tasting some very smelly cheese!   This was followed by swimming in Dieppe which was great fun and the evening was rounded off with a quiz, hosted by quizmaster Mr Judd.   On the last morning, Year 7 visited a snail farm and sampled some delicious snail pastries, some children even bought some to take home for their dinner!  The final visit was to the Nausicaa Aquarium in Boulogne, the largest aquarium in Europe. This proved to be very popular as the children enjoyed spotting sharks, seals and penguins!   Year 7 all agreed that it had been a fantastic trip!