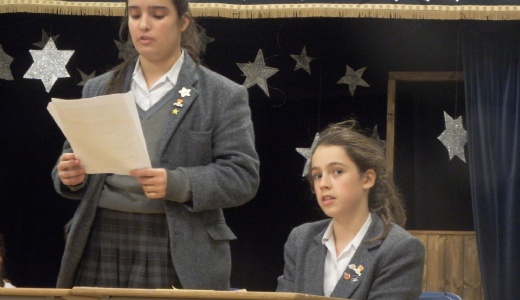 Year 8 were in great form in their most recent battle of words in the Year 8 Debate which took place  on Friday of last week.

The two topics selected by the children themselves were: “Should Fortnite be Banned?” and “Should Free Speech be Protected on Social Media?”  These were two serious topics which are clearly of interest and involve many of them personally and the whole year group worked with great interest in preparation for the debate.

It takes considerable courage and determination to stand up and deliver a debate in front of other peers and parents so huge congratulations must go to our eight very courageous girls who volunteered to take on the challenge and who worked so hard to deliver compelling and persuasive speeches. A few trembling knees and the occasional quivery voice were the only signs of any nerves and they all delivered clear, well-projected and strongly delivered speeches.

Very well done to Molly and Skye, who worked very hard and had some extremely persuasive points in their bid to convince us to ban Fortnite. They were strongly countered by Molly and Emily. With perhaps a little strategic voting on the day from some members of the audience, Molly and Emily triumphed, gaining a considerably large number of votes and so Fortnite shall continue, (much to the dismay of some of the adult members of the audience!) However, Molly and Emily did have some recommendations for parents, advising that they take the “controls” a little more readily to ensure that their children are not endangering their health and well-being by spending too long on this very popular game. Wise advice, indeed!

We then had Amelie and Freya arguing against Sabella and Emily on the topic of "Free Speech on Social Media". Once again the girls spoke strongly and clearly with some very persuasive points on both sides of the argument and they fielded some very challenging questions too. The swing on this occasion went to Sabella and Emily who were very compelling in their arguments for retaining as much Free Speech as possible, as it is a hard-earned right, which so few countries in the world are able to enjoy.

Well done to everyone who took part including our Chief Moderators Toby and Freddie and our other moderators: Maddie, Sophie, William, Meg, Tallulah, Nicholas, Jack and Bella.

Many thanks to Mrs Atkins for her organisation and to Mr Ridge and Mr Mathers for their support.