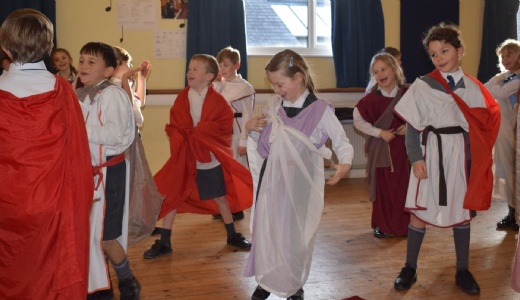 The Year 3s were transformed into Ancient Greeks on Tuesday when a Living History Workshop arrived by chariot for a series of interactive workshops to help support their new topic.

The children started the day by taking part in an augury ceremony which involved making sure the birds were behaving as you would expect, sacrificing cows (because we teachers had forgotten to do it earlier) and worshipping Nike, the goddess of Victory and Strength - all before the chosen few took part in a bull jumping event! We then all visited the agora, meeting market sellers and haggling over fish and olives, leather and pottery using our obles as payment. All the children helped created a wonderful Greek frieze and voted for which teacher should be ostracised, a rather brutal way for the Athenian people to show their displeasure for those in charge!

The afternoon saw the children create a piece of Greek theatre with very dramatic consequences and finally all children competed on behalf of their city states to win the “wrestling” at the Olympic Games. It was a highly competitive event with Marcurius of Thebes as the victor.

The children were fantastically engaged all day and now have a true understanding of life in Ancient Greece!