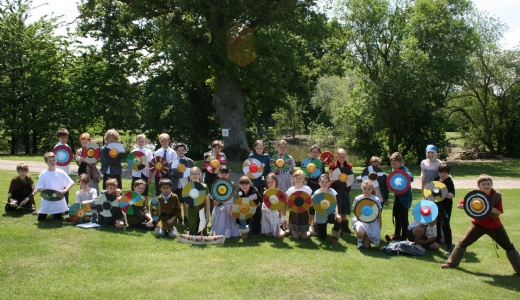 On the Friday before half term, Year 5 travelled back in time to the Viking age for a morning of fun activities to enrich their learning.

Sporting some wonderful costumes, they weaved, made a fleet of mini longships, crafted brooches and ‘Thor’s hammer’ amulets, ‘carved’ runestones with messages of prosperity and joy (at least we think that’s what they say…!) and painted their own colourful Viking shields.

After an authentically Viking snack break (apple juice and school-made oaty Viking biscuits) came the finale of the morning: a Viking ship burial ceremony.  Miles and Antonia read Viking prayers to send our ‘warrior’ on his way to the afterlife, before the maintenance team, to much excitement, stepped in to set our Viking ship on fire and sailing majestically across the pond.

For a few moments fear (or anticipation?) built at the prospect of starting a ‘wildfire’ as the ship drifted towards the shrubs at the rear of the pond, but with Mr Sutton and his team in attendance, the safety of both the children and the wider Hawkhurst community was, fortunately, never in doubt!

A huge thanks goes to Ms Searle and all her helpers; Mrs Gunson, Mrs Robinson, Mrs Jones, Mrs Budd, Mrs Allfrey and a friend of Ms Searle's (also a Mrs Ward) who came in especially to help.  Thanks also to supporters Ms Potter, Mr and Mrs Ward and Mrs Walker and most especially all the children for participating with such enthusiasm.