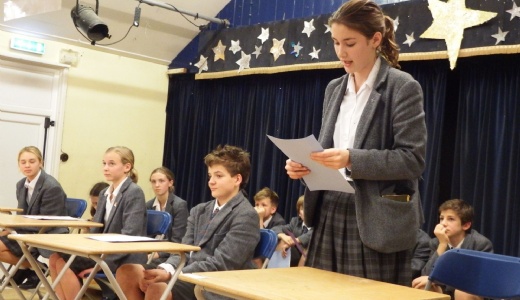 Congratulations to all our Year 8 debaters and moderators who provided us with a thought-provoking and well-researched pair of debates last Friday night.

Having undertaken their own independent and class research on their chosen topics, the debaters wrote their own speeches, trying to incorporate as many persuasive techniques as possible in order to gain the audience’s votes. Each debater spoke strongly and clearly and gave some very compelling and powerful arguments, supported by plenty of statistics.

Corey L, Wilfie W, Felix H and Ben W spoke powerfully about the benefits and alternatives to E cars. Winning the vote in this debate were Felix and Ben who highlighted the limitations of E Cars at present and proposed some viable alternatives which proved to be powerfully persuasive factors.

Daisy Q and Isabella R were arguing for more equal rights for women in sport. Better pay, more air-time and more recognition by the media in general were part of their proposals. Pippa J and Ben P had the difficult and unenviable task of speaking against the proposal; citing men’s dedication and physical strength, suggesting that this made for more exciting matches as contributing factors behind their higher pay, greater air-time and media support. The debaters all did their best to field some challenging questions from the floor and from their own peers, but the undeniable inequity of the situation, and some very strongly argued points by Daisy and Isabella, ensured that they gained the audience’s vote and won the debate.

Well done to all participants for a very enjoyable and stimulating pair of debates.