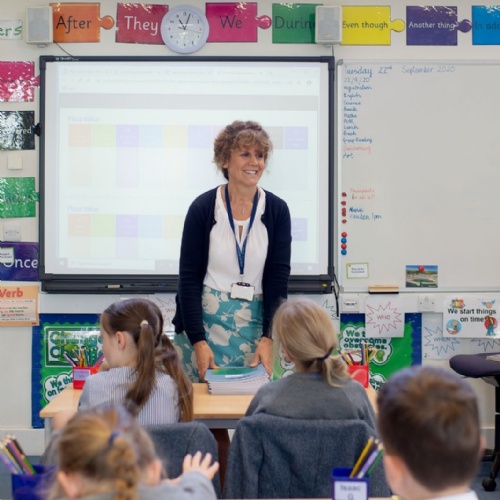 This week's interview is with Mrs Mathers, who is one of our Year 4 Form Teachers, and who has some truly wonderful stories to tell!

What inspired you to be a teacher?

My father inspired me to be a teacher. He became a Headmaster at the tender age of 28, he was the kindest most understanding and inspiring person. From a very young age I remember listening to him talk about the children he taught with such compassion sprinkled with an excellent sense of humour and I knew being a teacher was what I wanted to do.

Tell us about your path into teaching:

After graduating from Liverpool University with a BA in English, I assisted in an Assessment Centre attached to a school for children with Social, Emotional and Mental Health Special Needs. In that environment I saw how much benefit the children gained from Art and Music and I did think about becoming an Art Therapist in order to help children communicate their thoughts and anxieties through the medium of art. However, I decided that I could combine everything I had a passion for in studying for a PGCE combined with Religious Studies Teaching Cert. Training to be a teacher in inner city Liverpool was a baptism of fire for me but I absolutely loved every extraordinary moment.

Since graduating I have taught from Nursery through to Year 11 GCSE year. I have had the privilege to teach in a wide variety of schools such as a school with a close connection to an American Army Air Force Base at RAF Burtonwood where my teaching was occasionally drowned out by giant American helicopters moving field hospitals for the first Iraq war, schools in the London Borough of Haringey where there were 180 different languages spoken and we had our own carnival at the end of the term, the British School of Lanzarote in the beautiful, dramatically geographically diverse Canary Islands. It rarely rained there but when it did the children would excitedly stand on their chairs so they could watch the downpour - very much like English children do when it snows.

What do you love most about teaching?

Every single day is different. I have been asked if it is boring teaching the same subjects to the same year group? My answer is always an unequivocal NO! The children bring such joy and interest in such a variety of ways.

What is the funniest moment you’ve had in the classroom?

There have been so many! One of the many wonderful things about our profession is the laughter!

I was teaching History to Year 4, our topic was World War 2 and I was intent on playing the sound of a WW2 air raid siren made from an actual recording from the war on Youtube. I asked the children to be very quiet and explained to them they were going to hear a very important sound and had to think about how it made them feel. The class waited in anticipation… eyes closed… when a voice suddenly came through the Smartboard speakers loudly declaring “I am pregnant!”  A pregnancy test advert had inadvertently popped up between KS2 History clips. I’ve never moved so fast to the off switch! So all day afterwards I was asked “Mrs Mathers why did the lady say she was pregnant?”.

I often play games with my pupils to gain their attention-eg point to the clock everyone, clap your hands three times, fold your arms… type of thing. Unfortunately, there was one time where I called out “Hands on my head everyone” and was nearly knocked over by the ensuing rush of keen to please eight year olds.

What’s the most important lesson you can teach?

We are all different, the world would be a dull place if we were all the same.

What has been the proudest moment of your career so far?

Meeting a former pupil who told me that she had chosen her A level subjects because of the lessons she had had with me in Year 5.

What are you most excited about at Marlborough House this term?

For me it is getting back to the vibrancy of the ‘real’ classroom and being able to teach ‘real’ children and therefore being able to see how they are coping and feeling in a split second.

What makes Marlborough House such a special place to be?

Most definitely the warm, family atmosphere created by the people who work here.

Unusual Fact I am a member of the British Sub-Aqua Club and have gained a Sports Diver qualification.

Highlight of my Day When children listen intently to an aspect I am teaching. I just think ‘Wow’.

The books I am reading Clash of Kings by George RR Martin, The Five Powers by Stephen Fulder

Most memorable moment at MHS Being caught in a snow storm on the MHS ski trip in Switzerland with Mr Mathers and Mrs Dipper (the children were safely down the mountain in the chalet with their instructors). We truly couldn’t judge what was up or down and the terrain around us merged into a mass of white. We managed to find our way to a narrow track that we hoped would take us to a lift station. To our horror out of the gloom came the most enormous piste basher trundling its way up the mountain leaving us with nowhere to go but to flatten ourselves against a wall of snow. Luckily, our ski instructor Nico, managed to attract the driver’s attention by standing in front of the cab shouting at the top of his voice and waving his snowboard. We survived and, just as we could breathe again, the school mobile rang which Mrs Dipper, ever the professional, dutifully answered. Still clutching on to her ski poles for dear life, while we were all being blinded by the blizzard, she then held a very sensible conversation with a parent who wanted to know how her daughter was getting on with the skiing. We never did tell that parent we were clinging on to the side of a mountain at the time!