Behind the scenes of the 2019 Rugby World Cup 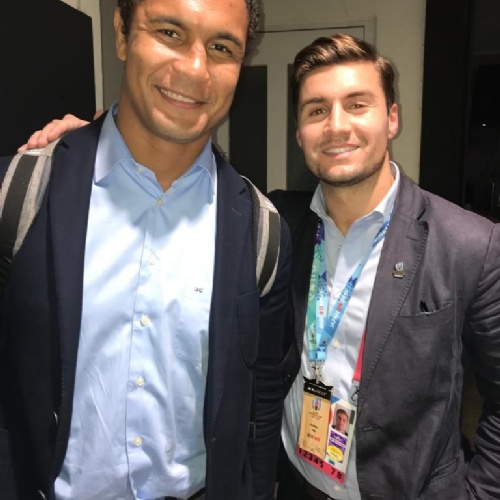 I work at IMG, and last Autumn I was lucky enough to head to Japan to work on the 2019 Rugby World Cup. IMG brokered all agreements across sponsorship, travel and hospitality, and licensing and retail for the tournament.

I worked as a Commerical Venue Manager for both the Yokohama & Tokyo venues, which involved delivering all the sponsorship rights and benefits for the six Worldwide Partners (DHL, Heineken, Societe Generale, MasterCard, Emirates & Land Rover). This involved working on brand activation and key moments such as: MasterCard’s Player of the Match;  making sure the 10 match balls were signed by the two captains and referees; ensuring the LED pitch-side sponsor branding was running smoothly; and delivering priceless experiences and behind the scene tours for lucky sponsor guests with the likes of Bryan Habana, Dan Carter and Thierry Dusautoir (pictured) who captained France to the 2011 Rugby World Cup Final against the hosts New Zealand.  Also (occasionally!) being able to watch a bit of incredible international Rugby, as well as travel the truly beautiful country of Japan!

My favourite memory was the quarter final game between Scotland and Japan, where Typhoon Hagibis nearly stopped the match from taking place, but Japan's win galvanized the tournament. An incredible match to watch and deemed a sporting fairytale.