Latin and Classical Studies at Marlborough House is taken as an optional subject from Year 5. It provides a sound foundation of linguistic and cultural knowledge and imbues the children a respect and interest in the Classical World. 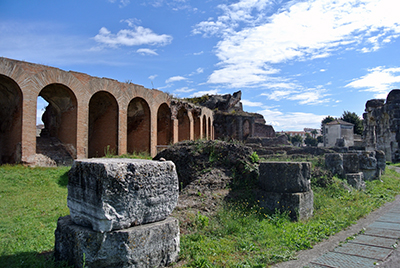 Classical Studies and Latin commences in Year 5 with an in-house designed course based around the everyday life of our MHS Roman family.  The programme is extended in Year 6 onwards to give the children a good grasp of the grammatical principles underlying Latin and of language in general. The programme promotes the understanding of grammatical principles and the ability to learn and to retain vocabulary and other factual information; it also develops the analytical powers necessary to deal with Latin in its sense as “the algebra “of language.

Year 5 are engaged with our own in- house course, which introduces them to both Latin and life experienced in the first century AD Pompeii for the Marlborough House Family. Years 6-8, including a number of scholars have embarked on the new concept based syllabus, which encourages many cross-curricular links. This method of teaching Latin encourages pupils to use grammar in context, which brings interest and excitement to a subject that many parents tell me they found lifeless! Our final exciting and rewarding change has been the addition of Level 1 GCSE. In so doing our pupils are able to use this qualification in their future academic profile statements; it gives those unable to study Latin further at their senior schools a satisfying and useful recognition of their studies at Marlborough House.

> It is important to their depth of understanding that we see the Romans and their language outside of the classroom. We been to many interesting sites, reasonably locally, as well as further a field to Campania and to Roma. The pupils can learn so much from all these visits.

Through our emphasis on the cultural element of the subject,  we give pupils an overview of Classical history and culture and this is enhanced through external visits, which have included in recent years Lullingstone Roman Villa,  The Painted House in Dover,  Richborough Roman Fort,  and “Life and Death in Pompeii and Herculaneum” at the British Museum.  There is a bi-annual trip offered to Latin students which alternates between Pompeii and area and Roma.

Latin enjoys success in scholarship and recently with the introduction of GCSE, all pupils have the ability to leave with a lasting qualification. We also offer Ancient Greek at scholarship level.